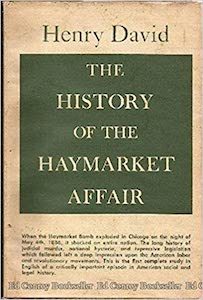 Several years ago, I joined a discussion group on Chicago history at my neighborhood library. The first meeting I attended was devoted to three books about the Haymarket Affair and the origins of May Day. I would strongly recommend all three:

The History of the Haymarket Affair: A Study in the American Social Revolutionary and Labor Movements by Henry David. (This was originally published in 1936 by Farrar and Rinehart, and then reissued with a new introduction in 1958 by Russell & Russell.)

The Haymarket Tragedy by Paul Avrich. (This was published in 1984 by Princeton University Press.)

Death in the Haymarket: A Story of Chicago, the First Labor Movement and the Bombing That Divided Gilded Age America” by James Green. (This was published by Anchor Books in March 2006.)

Taken together, these books give the reader a comprehensive view of the economic and political context for the Haymarket Affair. Henry David’s book is the least sympathetic to the labor leaders put on trial after the tragic events at Haymarket Square on May 4, 1886

and the most skeptical of their motives. However, Professor David is extremely fair and detailed in his analysis of the facts of what happened at the Square and the trial and its

aftermath. His complete refusal to romanticize the defendants ultimately makes for a more damning indictment of their persecution than if he had been one of their partisans. This book also has valuable information about the influence that European revolutionaries had on the Haymarket defendants. Frankly, not all that influence was positive.

In great detail, all three books illustrate how self-sacrificing and brave the Haymarket defendants were. The books show that those leaders believed sincerely in the idea of a “cooperative commonwealth,” though it was close at hand, and worked tirelessly to bring it about.

The books recount how the Haymarket leaders’ legitimate and quite understandable hatred of tyranny led them to adopt a position on democracy inside their movement which amounted to tolerating ultra-democracy. This honest mistake gave free rein to agent provocateurs and to other suspicious and dubious characters who swarmed around the vibrant labor movement of that time.

Today, new challenges have to be faced, and confronted with intellectual courage, just as the leaders of that era faced the gallows with such magnificent physical and moral courage. Those looking for sources of inspiration in these difficult times would do well to read these three important books.