Home REVIEW The War Before the War: Fugitive Slaves and the Struggle for America’s...
Facebook
Twitter
Email
Print 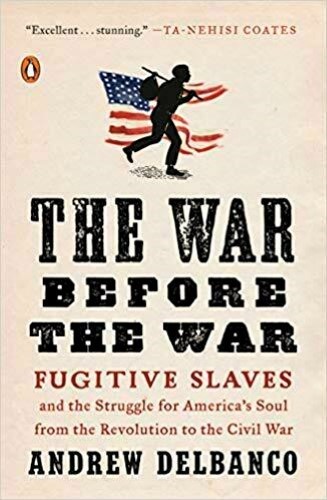 THE WAR BEFORE THE WAR | Andrew Delbanco | Buy Here

Andrew Delbanco—a professor of American Studies at Columbia University—has written an impressive study of the role that fugitive slaves played in America before the Civil War. On the very first page of his introduction, Delbanco points out that the United States “could not have been created if the eradication of slavery had been a condition of its creation.”

On that same first page, Delbanco also points out: “The hard truth is that the United States was founded in an act of accommodation between two fundamentally different societies.” In one-half of the country, slavery was basic to its way of life while in the other it was fading or already gone.

“The founding father tried to stitch these two nations together with no idea how long the stitching would last.” (page 2)

Despite these attempts at accommodation, as Delbanco points out:

“Fugitives from slavery ripped open the screen behind which America tried to conceal the reality of life for black Americans. … Fugitive slaves exposed the contradiction between the myth that slavery was a benign institution and the reality that a nation putatively based on the principle of human equality was actually a prison house in which millions of Americans had virtually no rights at all. By awakening northerners to this grim fact, and by enraging southerners who demanded the return of their ‘absconded’ property, fugitive slaves pushed the nation toward confronting the truth about itself. They incited conflict in the streets, the courts, the press, the halls of Congress, and perhaps most important in the minds and hearts of Americans who had been oblivious to their plight. This manifold conflict – under way long before the first shots were fired in the Civil War – was the war before the war.”

“By the 1780s, the number of slaves in what was about to become the United States was approaching three-quarters of a million; with all but 50,000 concentrated in the South. Within 20 years, every state north of Delaware was to take judicial or legislative steps to abolish slavery either immediately or on some schedule of future completion, and by the 1780s, the process was well underway. In the nation’s first capital city, Philadelphia, the number of slaves had declined since the 1760s from roughly fourteen hundred (in a city of some thirty thousand) to less than half that number by the time of the revolution. The men who converged there in 1787 faced a daunting problem: how to consolidate a nation in which slavery was the bedrock of the economy and culture in one region but increasingly peripheral in the other.”

The demand by slaveholding states that other states return fugitive slaves was enshrined in Article 4, Section 2, Clause 3 of the U.S. Constitution. This clause came to be known as the fugitive slave clause. In 1792, the U.S. Congress passed the first Fugitive Slave Act to strengthen that provision of the Constitution. President George Washington signed it into law on Feb. 12, 1793, but the federal government remained too weak to enforce it.

In the very first days of the existence of the United States, the qualitative difference between the two different economies and legal codes could be ignored or papered over. The two “sections” were bound together economically by the fact that slaves in the South produced the raw materials for industry in the North. (This was particularly true of the use of cotton in Northern textile mills.) At first, the North was economically dependent on the South and could not challenge it. But the invention of the steam engine changed everything. It led to a dramatic increase in the Northern population and industry. The steam-powered cotton gin also dramatically increased the speed with which cotton could be prepared for market and led to a gigantic expansion of slavery. With both societies needing new territory to expand in order to survive, the stage was set for a clash of epochal proportions.

In the first half of the 19th century, northern states adopted “personal liberty” laws that put up further barriers to the rendition of fugitive slaves, including laws guaranteeing jury trials for accused fugitives and prohibiting state officials from assisting in returning them to the South.

By the late 1840s, the problem had become a political and moral crisis.

The final reckoning was set in motion in 1846 with the outbreak of the Mexican War.

By the time the Mexican-American War ended in 1848, the United States had seized a huge amount of territory stretching from Texas to California. This immense expansion of territory under the control of the federal government forced the country to again face a fundamental question: Would slavery be confined to the states where it already existed or would it be permitted in the new territories which had been seized, territories which would eventually become states?

As Delbanco points out: “The fragile political truce that had held the United States together was coming apart.”

In 1850, Congress attempted to resolve the dilemma with a series of measures which came to be known as the Compromise of 1850. Delbanco calls that group of laws “an intricate balancing act designed to prevent an irreparable rupture between the free states and the slave states.”

One key element of the Compromise of 1850 was a new measure, the Fugitive Slave Act of 1850, which had been introduced in Congress in January 1850 by Senator James Mason of Virginia.

“It was meant to be a remedy and a salve,” Delbanco explains, “but it turned out to be an incendiary event that lit the fuse that led to civil war.”

Delbanco describes the new fugitive slave law as “act without mercy.” It denied those accused of being runaways the rights of habeas corpus and trial by jury, and denied them the right to present almost all exonerating evidence.

The Fugitive Slave Act of 1850 criminalized the act of sheltering a fugitive and required local authorities to assist the claimant in recovering his lost human property. It endangered free black people in the North, even those who had never been slaves.

On Sept. 18, 1850, the president of the United States, Millard Fillmore, signed the Compromise of 1850 into law. An important thing to understand about the Fugitive Slave Act of 1850 is that with its passage for the first time the federal government assumed responsibility for recovering fugitive slaves. In addition, anyone who interfered with that recovery would be committing a federal crime.

Delbanco warns against judging the participants in the debate over the Compromise of 1850 by our standards today. He argues that the Compromise may have been an example of “buying time that eventually made emancipation possible.” I’m not sure that I buy his argument, but it is worth thinking about what would have happened if the Civil War would have broken out in 1850 instead of 1861.

Delbanco goes on to describe what happens after the Compromise of 1850 – the Kansas-Nebraska Act (1854); “Bleeding Kansas” (1856); and the Dred Scott decision (1857). With each development, the fragile truce between the sections is stretched further and further. The ultimate expression of the crisis of the Union is when Southern states secede and then attack a federal outpost (Fort Sumter). The fragile truce is broken. The result is what occurs whenever a truce is fragrantly violated – outright war.

Clearly, this book deserves the description given to it by Harvard professor Henry Louis Gates. He called it an “astonishing work.” Read it!