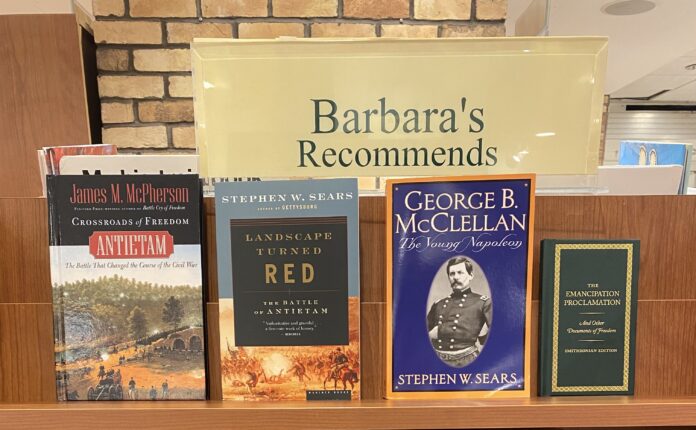 A grim Civil War battle has much to teach us

It was the bloodiest single day of fighting ever to take place in North America. More than 2,000 men gave their lives to halt a slaveholders’ army. Within days of their sacrifice, the first step was taken to abolish slavery in the United States. The Civil War’s Battle of Antietam deserves far more attention than it currently gets. There are several important books on the battle, all worth reading.

The battle took place on September 17, 1862 near Antietam Creek in western Maryland. Twelve hours of hard fighting gave the Union Army a partial victory. That outcome provided Abraham Lincoln the political protection he needed to begin steps that would transform the Civil War from a war to save the Union into a war to abolish slavery.

Five days after Antietam, Lincoln convened his Cabinet and announced that, if the Confederate states were still in rebellion on January 1, 1863, he would free all their slaves. Lincoln was true to his word and, on New Year’s Day in 1863, he issued the Emancipation Proclamation. This executive order freed only the slaves in those states or parts of states that were in rebellion. It did not abolish slavery throughout the United States. However, it transformed the nature of the war, and unleashed a process that led inexorably to the Thirteenth Amendment to the U.S. Constitution, which did abolish chattel slavery throughout the United States.

The stage for the battle of Antietam was set in early September 1862. Emboldened by several recent victories, General Robert E. Lee moved the Confederate Army of Northern Virginia into Maryland, a slave state that had remained in the Union. A major Confederate victory inside Union territory would strengthen pro-Confederate sentiment in the North right before the fall 1862 Congressional elections. It might also convince some European powers to intervene in the war on the side of the Confederacy.

Lee believed that the commander of the Union’s Army of the Potomac – General George B. McClellan – was cautious to the point of cowardice. Lee also thought that McClellan’s army would be demoralized from recent defeats. As historian Stephen W. Sears has pointed out, these assessments were “only half right.”

McClellan was a supporter of slavery who constantly made excuses for why he would not fight the Confederate Army. At the Battle of Antietam, McClellan’s conduct fully justified Lee’s contempt for him. McClellan had learned Lee’s plans and had more troops at his disposal than Lee did. Still, he refused to move decisively against Lee, and allowed Lee’s army to escape after the battle.

But if McClellan violated all the principles of warfare at Antietam, the same cannot be said for his soldiers. Forced to attack in “driblets” (as one Union general put it), the soldiers of the Army of the Potomac fought bravely.

The courage of the Union troops was vividly demonstrated in the struggle to take “The Sunken Road” – a small depression at the edge of a farm. After several attacks against this strategic position failed, the task of capturing it fell to one of the Union Army’s most celebrated units – the Irish Brigade. This unit was known for marching into combat behind emerald green battle flags bearing gold shamrocks and harps. Shouting its battle cry (“Clear the way!”) in Irish, the Irish Brigade advanced across an open field. Intense enemy cannon and rifle fire “cut lanes” into its ranks. Within minutes, hundreds of its soldiers were killed or wounded. Ever since, the Sunken Road has been known as the “Bloody Lane.”

In all, 2,108 Union soldiers were killed at Antietam; 9,549 were wounded; and 753 ended up missing. The carnage that day was so terrible that – as one Union soldier put it – “the whole landscape for an instant turned slightly red.” This sacrifice saved the day for the Union; Lee was forced to retreat back into Virginia.

There are moments in history when the future of humanity rests on what a relatively few people are willing to endure. September 17, 1862 was such a moment. The bravery of the Union soldiers that day did not end the Civil War. Lee’s army would invade Union territory again, and the war would drag on for two more long years. However, the Emancipation Proclamation and the Thirteenth Amendment are direct results of Antietam.

Many books have been written about Antietam in the 160 years since the battle. Here are some I’d recommend:

This study is a combined diplomatic, political, and military history. It covers the battle itself, but also the key events preceding it and the battle’s consequences.

While James McPherson concentrates on the political and diplomatic consequences of the battle, Stephen Sears focuses on the military action itself. “Landscape Turned Red” is a detailed, precise account. It vividly conveys the horror of war and the ebb and flow of a bloody battle whose outcome was in doubt for much of the long day. It includes numerous maps showing the position of the opposing armies at different points in the day. These are especially helpful.

In addition to his study of the Antietam battle, Stephen Sears has also written a full-length biography of the Union commander at Antietam – George B. McClellan (1826-1885). This book covers the whole of McClellan’s life, not just his role at Antietam. While Sears bends over backwards to interpret McClellan’s actions in the most positive way possible, in the end, McClellan comes across as an arrogant son of privilege blinded by his own egotism and narrow-mindedness. Sears is way too sympathetic to McClellan, but the book is worth reading for all the fascinating information it contains.

This is a beautiful small hardcover with the full text of the Emancipation Proclamation and other important documents (such as the District of Columbia Emancipation Act). In a sense, the blood spilled at Antietam made this book possible.

I would urge book lovers to read these books. Surely learning the true history of the Civil War is the least we can do to pay homage to those who bled for freedom’s cause 160 years ago — beside a winding creek, on a day when the very landscape itself seemed to turn red.