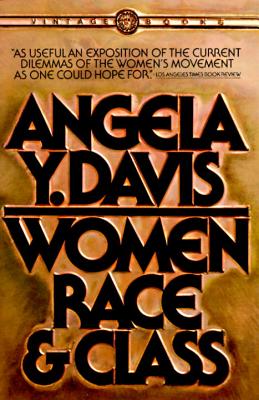 In Women, Race, and Class, celebrated activist, author and historian Angela Y. Davis outlines the history of the slavery abolition, women’s suffrage and communist movements in the United States. Her detailed account of these political movements questions traditional narratives of historical figures and illuminates the deeply ingrained white and male supremacy in the history of our country.

Women, Race and Class is a book everyone should read, even those who consider themselves familiar with the subject material. Davis’ unique perspective and insightful analysis puts this work in a league of its own.

ABOUT THE BOOK
A powerful study of the women’s liberation movement in the U.S., from abolitionist days to the present, that demonstrates how it has always been hampered by the racist and classist biases of its leaders. From the widely revered and legendary political activist and scholar Angela Davis.

“As useful an exposition of the current dilemmas of the women’s movement as one could hope for.” –Los Angeles Times Book Review

1. The Legacy of Slavery: Standards for a New Womanhood
2. The Anti-Slavery Movement and the Birth of Women’s Rights
3. Class and Race in the Early Women’s Rights Campaign
4. Racism in the Woman Suffrage Movement
5. The Meaning of Emancipation According to Black Women
6. Education and Liberation: Black Women’s Perspective
7. Woman Suffrage at the Turn of the Century: The Rising Influence of Racism
8. Black Women and the Club Movement
9. Working Women, Black Women, and the History of the Suffrage Movement
10. Communist Women
11. Rape, Racism and the Myth of the Black Rapist
12. Racism, Birth control and Reproductive Rights
13. The Approaching Obsolescence of Housework: A Working-class Perspective