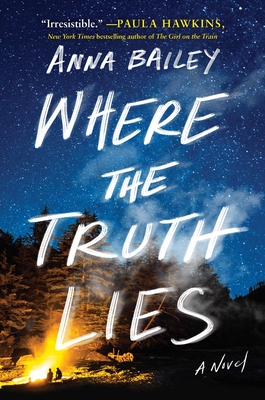 Review By Georgette Coan | Manager of the Woodfield Mall Bookstore

“Where The Truth Lies” by Anna Bailey is that rare occurrence of a debut novel blowing your doors off from the first page, all the way up until the last page. 17-year old Abigail disappears from Whistling Ridge, a town that makes Twin Peaks look like Disneyland. Emma, Abigail’s best friend, begins to investigate what happened to her friend. With a cast of diverse, morally bankrupt characters, and the fate of a young lady’s life hanging in the balance, Bailey succeeds in making you care about the story of this missing girl and her friend, while also finding out what the backstory is around all of these town reprobates.

When a teenaged girl disappears from an insular small town, all of the community’s most devastating secrets come to light in this stunningly atmospheric and slow-burning suspense novel–perfect for fans of Megan Miranda and Celeste Ng.

The town of Whistling Ridge guards its secrets.

When seventeen-year-old Abigail goes missing, her best friend Emma, compelled by the guilt of leaving her alone at a party in the woods, sets out to discover the truth about what happened. The police initially believe Abi ran away, but Emma doesn’t believe that her friend would leave without her, and when officers find disturbing evidence in the nearby woods, the festering secrets and longstanding resentment of both Abigail’s family and the people of Whistling Ridge, Colorado begin to surface with devastating consequences.

Among those secrets: Abi’s older brother Noah’s passionate, dangerous love for the handsome Rat, a recently arrived Romanian immigrant who has recently made his home in the trailer park in town; her younger brother Jude’s feeling that he knows information he should tell the police, if only he could put it into words; Abi’s father’s mercurial, unpredictable rages and her mother’s silence. Then there is the rest of Whistling Ridge, where a charismatic preacher advocates for God’s love in language that mirrors violence, under the sway of the powerful businessman who rules the town, insular and wary of outsiders.

But Abi had secrets, too, and the closer Emma grows to unraveling the past, the farther she feels from her friend. And in a tinder box of small-town rage, and all it will take is just one spark–the truth of what really happened that night–to change their community forever.

Death in the Haymarket | James Green

Come on Over: 111 Fantastic Recipes for the Family That Cooks,...