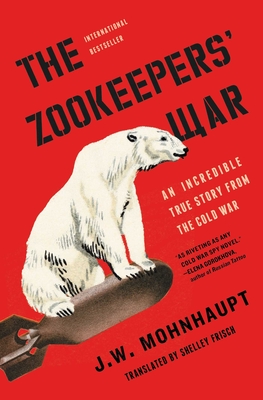 THE ZOOKEEPER’S WAR | J. W. Mohnhaupt | BUY BOOK
REVIEW
I don’t usually read history books but the cover drew me into reading about the animal collecting arms race the two major zoos on each side of the Berlin Wall found themselves in during the Cold War. The first chapter is difficult to get through, as it describes the effects of the Allied bombing during World War 2 on the Berlin Zoo and their animals. I do wish the book had gone more in depth into Katharina Heinroth’s tenure as zookeeper of the Berlin Zoo (located in West Berlin) from 1945 until Heinz-Georg Klös replaced her in 1956, but the entire book was a fascinating look at a historical era I knew very little about.
ABOUT THE BOOK

The unbelievable true story of the Cold War’s strangest proxy war, fought between the zoos on either side of the Berlin Wall.

“The liveliness of Mohnhaupt’s storytelling and the wonderful eccentricity of his subject matter make this book well worth a read.” —Star Tribune (Minneapolis)

Living in West Berlin in the 1960s often felt like living in a zoo, everyone packed together behind a wall, with the world always watching. On the other side of the Iron Curtain, East Berlin and its zoo were spacious and lush, socialist utopias where everything was perfectly planned… and then rarely completed.

Berlin’s two zoos in East and West quickly became symbols of the divided city’s two halves. And so no one was terribly surprised when the head zookeepers on either side started an animal arms race: rather than stockpiling nuclear warheads, they competed to have the most pandas and hippos. Soon, state funds were being diverted toward giving these new animals lavish welcomes worthy of visiting dignitaries. West German presidential candidates were talking about zoo policy on the campaign trail. And eventually politicians on both side of the Wall became convinced that if their zoo were proved to be inferior, then that would mean their country’s whole ideology was too.

A quirky piece of Cold War history unlike anything you’ve heard before, The Zookeepers’ War is an epic tale of desperate rivalries, human follies, and an animal-mad city in which zookeeping became a way of continuing politics by other means.

Say Nothing: A True Story of Murder and Memory in Northern...