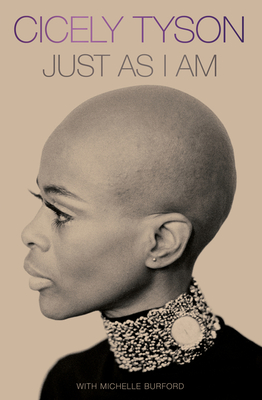 JUST AS I AM | BUY BOOK
BOOK REVIEW
When asked by Gayle King, in one of Ms. Tyson’s final interviews, “How would you like to be remembered?”, the reply of “I’ve done my best, that’s it,” says it all. Cicely’s strength of character, courage and life’s mission to educate and expose the world to humanity comes through on every page.
Cicely’s story is one to be savored. An insightful and entertaining read from a woman who indeed “DID HER BEST”
Rest in Power, Ms. Tyson.

“In her long and extraordinary career, Cicely Tyson has not only succeeded as an actor, she has shaped the course of history.” –President Barack Obama, 2016 Presidential Medal of Freedom ceremony

“Just As I Am is my truth. It is me, plain and unvarnished, with the glitter and garland set aside. In these pages, I am indeed Cicely, the actress who has been blessed to grace the stage and screen for six decades. Yet I am also the church girl who once rarely spoke a word. I am the teenager who sought solace in the verses of the old hymn for which this book is named. I am a daughter and mother, a sister, and a friend. I am an observer of human nature and the dreamer of audacious dreams. I am a woman who has hurt as immeasurably as I have loved, a child of God divinely guided by His hand. And here in my ninth decade, I am a woman who, at long last, has something meaningful to say.” –Cicely Tyson