The US author was beloved for his pun-filled bestseller following a bored boy who drives into a magical kingdom, and for The Dot and the Line

Norton Juster, author of bestselling children’s books The Phantom Tollbooth and The Dot and the Line, has died aged 91. His death was confirmed by his publisher Penguin Random House on Tuesday, but no cause was revealed.

Children’s author and illustrator Mo Willems announced Juster’s death on Twitter on Tuesday. “My lunch partner, Norton Juster, ran out of stories and passed peacefully last night. Best known for THE PHANTOM TOLLBOOTH + THE DOT & THE LINE, Norton’s greatest work was himself: a tapestry of delightful tales… continued 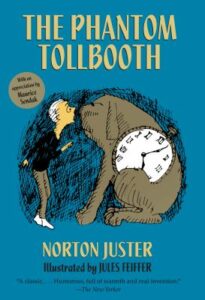 Hailed as “a classic. . . . humorous, full of warmth and real invention” (The New Yorker), this beloved story–first published more than fifty years ago–introduces readers to Milo and his adventures in the Lands Beyond.

For Milo, everything’s a bore. When a tollbooth mysteriously appears in his room, he drives through only because he’s got nothing better to do. But on the other side, things seem different. Milo visits the Island of Conclusions (you get there by jumping), learns about time from a ticking watchdog named Tock, and even embarks on a quest to rescue Rhyme and Reason! Somewhere along the way, Milo realizes something astonishing. Life is far from dull. In fact, it’s exciting beyond his wildest dreams. . . .

Features an appreciation by Maurice Sendak, award-winning author of Where the Wild Things Are!

“I read [The Phantom Tollbooth] first when I was ten. I still have the book report I wrote, which began ‘ This is the best book ever.'”– The New York Times

“The Phantom Tollbooth is the closest thing we have to a modern Alice in Wonderland.”– The Guardian

“You loved the humor and adventure . . . and [now] you’ll marvel at [the book’s] wit, complexity, and its understanding of how children perceive the passage of time.” — Entertainment Weekly

The Phantom Tollbooth is a universally beloved childhood classic. In the 50 years since its original publication, millions of children have breathlessly followed Milo’s adventures in the Lands Beyond.

Now Leonard Marcus, a nationally acclaimed writer on children’s literature, has created a richly annotated edition of this perennial favorite. Marcus’s expansive annotations include interviews with the author and illustrator, illuminating excerpts from Juster’s notes and drafts, cultural and literary commentary, and Marcus’s own insights on the book. The Annotated Phantom Tollbooth also includes an introduction that shares the fascinating background on the book’s publication””Juster and Feiffer met as young neighbors in Brooklyn, New York, and thus began a fortuitious collaboration on a project that would become an instant classic””as well as its enduring place in the world of children’s literature.

The Annotated Phantom Tollbooth is the perfect way to honor a classic and will be welcomed by young readers and fans of all ages. 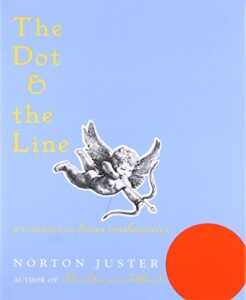 THE DOT AND THE LINE

Once upon a time there was a sensible straight line who was hopelessly in love with a beautiful dot. But the dot, though perfect in every way, only had eyes for a wild and unkempt squiggle. All of the line’s romantic dreams were in vain, until he discovered…angles! Now, with newfound self-expression, he can be anything he wants to be–a square, a triangle, a parallelogram….And that’s just the beginning!First published in 1963 and made into an Academy Award-winning animated short film, here is a supremely witty love story with a twist that reveals profound truths about relationships–both human and mathematical–sure to tickle lovers of all ages.