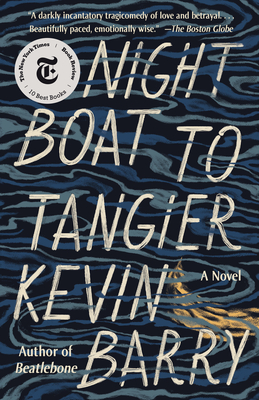 This stunningly poetic novel tells the stories of Maurice and Charlie, two old friends and ex-partners in the international drug trafficking game that have reunited to search for Maurice’s runaway daughter. The narrative shifts between the men’s current predicament and their dark and complicated past of crime, love and loss, each flashback more tragic than the last.

In the dark waiting room of the ferry terminal in the sketchy Spanish port of Algeciras, two aging Irishmen–Maurice Hearne and Charlie Redmond, longtime partners in the lucrative and dangerous enterprise of smuggling drugs–sit at night, none too patiently. It is October 23, 2018, and they are trying to locate Maurice’s estranged daughter, Dilly, whom they’ve heard is either arriving on a boat coming from Tangier or departing on one heading there.

This nocturnal vigil will initiate an extraordinary journey back in time to excavate their shared history of violence, romance, mutual betrayals, and serial exiles. Rendered with the dark humor and the hardboiled Hibernian lyricism that have made Kevin Barry one of the most striking and admired fiction writers at work today, Night Boat to Tangier is a superbly melancholic melody of a novel, full of beautiful phrases and terrible men.

Big Lies in a Small Town