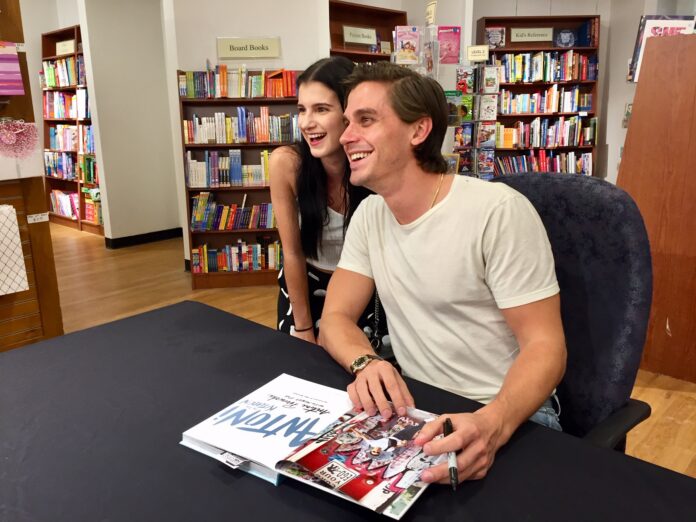 CHICAGO, IL–The books began selling a few days prior to his arrival, and on the day of the event, a crowd of foodies, fans, and curious onlookers warmly welcomed Antoni Porowski, the food and wine guru on Netflix sensation Queer Eye.

According to those who know him well, Antoni meets people where they live—literally. With appealing vulnerability, he shows cooks of all levels how to become more confident and casual in the kitchen. The verve and naturalness of his approach earned raves from Food & Wine and Bon Appétit to GQ and the New York Times, which noted his dishes prove that “sometimes simple is anything but simplistic.”

According to his publisher, “some of the recipes in his newest book, Antoni in the Kitchen, are weeknight healthyish meals, while others are perfect for off-the-cuff entertaining. Visual stunners, they’re often composed of fewer than five ingredients. Whether Bastardized Easy Ramen; Malaysian Chili Shrimp; Roasted Carrots with Carrot-Top Pesto; or Salty Lemon Squares, all are visual stunners and can be carried off with panache, even by beginners.”

MORE ABOUT ANTONI
As Netflix’s Queer Eye food and wine connoisseur, Antoni Porowski brings with him a lifelong passion for food and its power to bring people together. Originally from Canada, Antoni was bitten by the culinary bug at a young age as he discovered the joy cooking brings from the likes of Julia Child, Jacques Pépin, Anthony Bourdain and, most importantly, his own mother.

A self-taught cook, Antoni went to work in restaurants from Montreal to New York City where he continued to hone his craft and find his place in the culinary world. While in New York, Antoni found an inspired mentor in the original Fab Five food and wine expert Ted Allen. His work with Allen, combined with his university degree in psychology, uniquely influenced his underlying culinary philosophy: food should tell a story and the heart and the stomach are inter-connected.