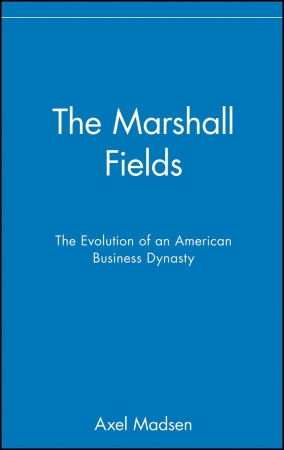 The book traces the history of the Marshall Field family from the first Marshall Field, the founder of the department store, through his descendants. The first Marshall Field was a genius at customer service. He was also very anti-union and was instrumental in making sure that several union organizers were hanged in the late 1880s in the infamous “Haymarket Tragedy.” The first Marshall Field died in January 1906. His son Marshall Field II died before him. His grandson — Marshall Field III — became a New Deal liberal and a strong supporter of FDR.”Marshall [Field III] voted for Herbert Hoover and the return to normalcy that Republicans promised in the 1932 election. However, he was soon drawn to Franklin D. Roosevelt and his heady crew of New Dealers. He repeated Joseph Kennedy’s line that the country’s rich should go down on their knees and thank FDR for saving their fortunes.” (Page 217). The book describes how Marshall Field III bankrolled a new pro-FDR newspaper in Chicago to challenge the ultra-conservative Chicago Tribune. It was originally called the Chicago Sun. In 1947, Marshall Field III purchased the Chicago Times and merged it with the Sun to create the Chicago Sun-Times. This section of the book really gives the reader a sense of the Franklin Roosevelt era and the role that wealthy liberals played in supporting FDR. It also describes how those forces came under attack during the McCarthy period. In 1950, Marshall Field III turned over control of the newspaper to his son, Marshall Field IV, a conservative and a Republican. Marshall Field III died in 1956; Marshall Field IV died in 1965. Ultimately, the family lost control of the famous department store and the newspaper, although the family remains extremely wealthy. The book was written before Macy’s bought Marshall Field’s and changed the name. Nonetheless, it still gives you a sense of the State Street store in its heyday — the Walnut Room, the bookstore that Field’s once had in the store, and the way customers were treated “back in the day.” The world has changed a great deal since then. The last two paragraphs of this book — a book published in 2002 — describe the sale of the Sun-Times’ “seven-story headquarters on the Chicago River” to Donald Trump and the plans to create Trump Tower in Chicago.

Kill Switch: The Rise of the Modern Senate and the Crippling...