Home NEWS The Guardian: “‘Without books, we would not have made it’: Valeria Luiselli...
Facebook
Twitter
Email
Print

The Mexican author won the Dublin literary award last week for Lost Children Archive. She reflects on how reading and writing have helped her through the pandemic

I read an article the other day about a computer program that writes fiction. You feed it a few lines, tell it the genre – science fiction, horror – and it produces the rest. And it’s not bad at it. It writes in full grammatical sentences; comes up with metaphors and analogies; emulates a writer’s particular style and so on. The author of the article, who seemed a little too thrilled about the existence of this diabolical toy from the depths of Silicon Valley says, at some point, that this “tool” was going to be the “salvation” for writers who dislike writing, which, according to him, is nearly all writers. I want to say to this writer: you are wrong. And to this robot that writes fiction I want to say … well I don’t want to say anything to it because, you know, robots are robots. 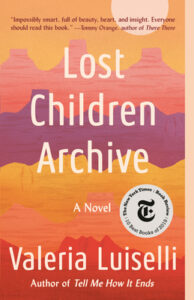 ONE OF BARACK OBAMA’S FAVORITE BOOKS OF THE YEAR

“An epic road trip [that also] captures the unruly intimacies of marriage and parenthood. . . . This is a novel that daylights our common humanity, and challenges us to reconcile our differences.” –The Washington Post

In Valeria Luiselli’s fiercely imaginative follow-up to the American Book Award-winning Tell Me How It Ends, an artist couple set out with their two children on a road trip from New York to Arizona in the heat of summer. As the family travels west, the bonds between them begin to fray: a fracture is growing between the parents, one the children can almost feel beneath their feet.

Through ephemera such as songs, maps and a Polaroid camera, the children try to make sense of both their family’s crisis and the larger one engulfing the news: the stories of thousands of kids trying to cross the southwestern border into the United States but getting detained–or lost in the desert along the way.

A breath-taking feat of literary virtuosity, Lost Children Archive is timely, compassionate, subtly hilarious, and formally inventive–a powerful, urgent story about what it is to be human in an inhuman world.