Join us and MIRA Books for a ONE-NIGHT ONLY special virtual event for Susan Mallery’s THE STEPSISTERS.
Each ticket includes an exclusive signed copy of THE STEPSISTERS and a FREE digital gift bag Each ticket holder will be entered to win raffle prizes! The first 20 to register will receive a free brass bookmark!
​
RAFFLE PRIZE INFORMATION
There will be four raffle prize winners (one per each store). The prize package includes:
EVERY READER WILL RECEIVE A FREE DIGITAL GIFT BAG. The bag includes:

#1 New York Times bestselling author Susan Mallery pens a love story of a different sort…a heartfelt tale of friendship between two women who used to be sisters. Once upon a time, when her dad married Sage’s mom, Daisy was thrilled to get a bright and shiny new sister. But Sage was beautiful and popular, everything Daisy was not, and she made sure Daisy knew it.

Sage didn’t have Daisy’s smarts—she had to go back a grade to enroll in the fancy rich-kid school. So she used her popularity as a weapon, putting Daisy down to elevate herself. After the divorce, the stepsisters’ rivalry continued until the final, improbable straw: Daisy married Sage’s first love, and Sage fled California.

Eighteen years, two kids and one troubled marriage later, Daisy never expects—or wants—to see Sage again. But when the little sister they have in common needs them both, they put aside their differences to care for Cassidy. As long-buried truths are revealed, no one is more surprised than they when friendship blossoms.

Their fragile truce is threatened by one careless act that could have devastating consequences. They could turn their backs on each other again…or they could learn to forgive once and for all and finally become true sisters of the heart.

Susan Mallery is the #1 New York Times bestselling author of novels about the relationships that define women’s lives—family, friendship, romance. Library Journal says, “Mallery is the master of blending emotionally believable characters in realistic situations,” and readers seem to agree—40 million copies of her books have sold worldwide. Her warm, humorous stories make the world a happier place to live. Susan grew up in California and now lives in Seattle with her husband. She’s passionate about animal welfare, especially that of the two ragdoll cats and adorable poodle who think of her as mom. 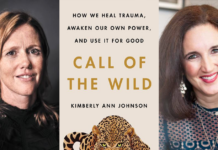 A Conversation with Tamika D. Mallory and Special Guests – Activating...