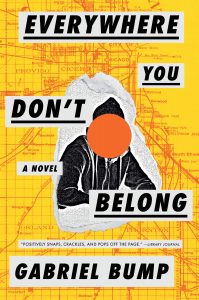 NEW ORLEANS — Chicago’s South Side comes alive through the writings of Gabriel Bump’s debut novel, “Everywhere You Don’t Belong,” which has earned him recognition as the 2020 winner of the Ernest J. Gaines Award for Literary Excellence.

The nationally acclaimed award, which recognizes outstanding work from African American fiction writers, is in its 14th year and comes with a $15,000 prize given by the Baton Rouge Area Foundation. Bump will receive the award in a virtual ceremony Jan. 28.

“When I got the call, I spent a couple of minutes making sure they were serious and I wasn’t being pranked,” Bump told The Associated Press. “It’s a surreal moment in another surreal year.” … more

Gabriel Bump grew up in South Shore, Chicago. His nonfiction and fiction have appeared in Slam magazine, the Huffington Post, Springhouse Journal, and other publications. He was awarded the 2016 Deborah Slosberg Memorial Award for Fiction. He received his MFA in fiction from the University of Massachusetts, Amherst. He lives in Buffalo, New York.

“A comically dark coming-of-age story about growing up on the South Side of Chicago, but it’s also social commentary at its finest, woven seamlessly into the work . . . Bump’s meditation on belonging and not belonging, where or with whom, how love is a way home no matter where you are, is handled so beautifully that you don’t know he’s hypnotized you until he’s done.”
—Tommy Orange, The New York Times Book Review