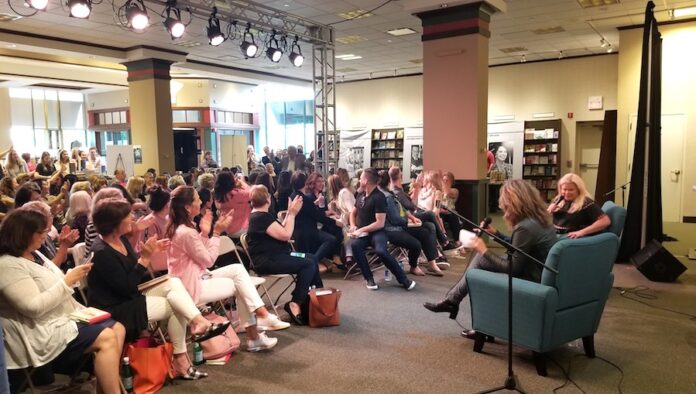 VERNON HILLS, IL—Sheri Salata is used to dealing with crowds. And, that’s what she drew to the launch of her new book, on June 6th, at Barbara’s at Hawthorn Mall. Her book, The Beautiful No, addresses the concerns, dreams, and plans of women over the age of fifty.

Salata has had quite an impressive career, including being one of the most powerful women in television production as the executive producer of The Oprah Winfrey Show, Co-President of Harpo Studios and OWN, the Oprah Winfrey Network. Today, Salata is a writer/producer, co-founder of the inspirational lifestyle brand, The Pillar Life and co-host of the podcast The Sheri + Nancy Show.

In launching her middle of life reinvention, Sheri realized that much of the cultural messaging for women in their fifties and beyond was about “winding down the party.

“In our culture, once women hit fifty-four nobody cares what we think,” she says. The media industry stops tracking our opinions, viewing habits, our spending. At fifty-five I ran a television network that, from a demographic perspective, could not have cared less about me.”

After a deep and thorough reckoning, Salata embarked on a year of committed radical self-care. She outlined the areas of her life where she would begin to make new dreams come true: body, health, spirituality, relationships, romance and sex, and a new professional dream to chart her own course as the co-founder of a media company. She says that step one was establishing the foundational premise that being selfish is not the same as narcissism.

“Acknowledging and cultivating your own well-being must come first,” she says. “It’s the very best offering you can give the people in your life, your community, the world.”

Salata acknowledges that the recipe will look different for each person and life can present challenges–maybe the kids are still at home, parents are depending on you, you’re burdened by debt–but your own quest begins right where YOU are and it’s never too late to rewrite the story of your life.

“Many of us are steeped in generational beliefs that will challenge the idea that we are even supposed to make the rest of our dreams come true.”

NYTimes: “Decades After His Death, Richard Wright Has a New Book...