The co-owner of the Newark Eagles also lent her influence during the civil rights movement to a “Don’t Buy Where You Can’t Work” campaign, calling on businesses to hire Black workers.

In death as in life, Negro Leagues baseball players and the people who made it possible for them to take the field remain locked in a battle for respect.

The names of Negro Leagues luminaries are cemented in baseball lore — the likes of Satchel Paige, Josh Gibson and Cool Papa Bell. But why don’t more people know about Effa Manley, too, says Andrea Williams, author of a new book about the Newark Eagles co-owner who remains the only woman who’s been inducted into the National Baseball Hall of Fame?

Not that Williams knew about her, either, until getting a tour for a new job in marketing and development at Kansas City’s Negro Leagues Baseball Museum.

“Honestly, to be real, I didn’t know a ton about the Negro Leagues,” says Williams, author of “Baseball’s Leading Lady: Effa Manley and the Rise and Fall of the Negro Leagues” (Roaring Brook Press/ Macmillan Publishers). “I knew of the Negro Leagues. It was a dope job, for sure, but it was also really enlightening because it exposed me to the stories that we just don’t get.” … continued 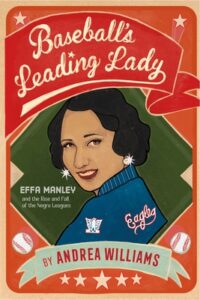 For fans of Hidden Figures and Steve Sheinkin’s Undefeated, Andrea Williams’s Baseball’s Leading Lady is the powerful true story of Effa Manley, the first and only woman inducted into the Nationa Baseball Hall of Fame.

Here is the riveting true story of the woman at the center of the Black baseball world: Effa Manley, co-owner and business manager of the Newark Eagles. Elegant yet gutsy, she cultivated a powerhouse team. Yet just as her Eagles reached their pinnacle, so did calls to integrate baseball, a move that would all but extinguish the Negro Leagues.

On and off the field, Effa hated to lose. She had devoted her life to Black empowerment–but in the battle for Black baseball, was the game rigged against her? 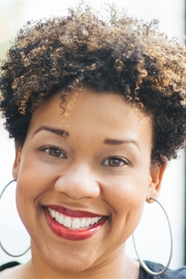 Andrea Williams is an author and journalist who worked in marketing and development for the Negro Leagues Baseball Museum in her hometown of Kansas City, Missouri, before turning to writing full-time. She now lives and writes in Nashville, Tennessee, with her husband and four children.