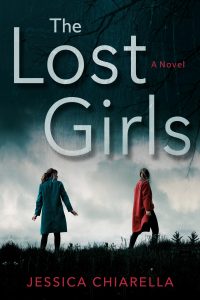 Outstanding…Surprising twists accent this poignant story about two
women, each with a single-minded goal. Chiarella is a writer to watch.”
⎯Publishers Weekly, starred review

“Dark, clever and gripping. Starting with its ripped-from-the-headlines opening to its fast and furious descent down the rabbit hole of lies, deceit and revenge, The Lost Girls grabs you by the throat and never lets go. Fans of
podcasts, true crime and edgy thrillers
must read this book!”
⎯Lisa Gardner, author of Before She Disappeared

“The Lost Girls is an up-to-the-minute modern thriller with a true-crime feel and a gritty protagonist unafraid to
spit in justice’s eye.”
⎯Alma Katsu, author of Red Widow

Acclaimed author Jessica Chiarella makes a departure from her critically lauded debut And Again with THE LOST GIRLS, a propulsive and engrossing thriller about a true crime podcast host who is pulled into the web of a case that may offer a surprising connection to her own sister’s disappearance years earlier. With haunting, elegiac prose, two expertly drawn female leads, and a knack for sinuous suspense, Chiarella crafts a twisty, addictive page-turner that takes a searing look at the true-crime phenomenon and sheds a necessary light on the aftermath of such cold cases on the families left behind. Fans of writers like Janelle Brown, Megan Miranda, and Cristina Alger, as well as podcasts such as Up and Vanished, My Favorite Murder, and Serial will be riveted by this memorable second outing, which heralds Chiarella as an exciting new voice in the mystery genre. It’s been more than twenty years since Marti Reese’s sister, Maggie, disappeared. Only eight-years-old at the time, Marti can’t remember what happened, just that Maggie got into a car and never returned. After years of grief and countless false leads, Marti is coping as best she can: abandoning her marriage, drinking to forget, and documenting her never-ending search via a true-crime podcast. But when the podcast becomes an unexpected hit and Marti thinks she’s finally ready to put it all behind her, a mysterious woman calls with new information that could lead her down a dangerous path. For years, Ava Vreeland has been fighting to overturn her brother’s murder conviction. After finding strange similarities between the two cases, Ava is certain there’s a connection between the murder and Maggie’s disappearance, one that could prove her brother’s innocence. Together, Marti and Ava embark on a quest for the truth, but the more Marti digs, the more she’s shaken by the answers she might find, and what it is she’s even searching for. . .

Jessica Chiarella is the author of And Again. She holds an MA in writing and publishing from DePaul University and an MFA in creative writing from the University of California, Riverside. She lives in Chicago, Illinois. 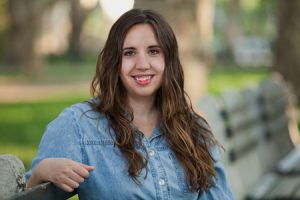 Leah Konen is the author of All the Broken People and of several young adult novels, including Love and Other Train Wrecks and The Romantics. She is a graduate of the University of North Carolina at Chapel Hill, where she studied journalism and English literature. She lives in Brooklyn and Saugerties, New York, with her husband; their daughter, Eleanor; and their dog, Farley.

ABOUT Leah Konen’s Book ” All The Broken People ” BUY BOOK 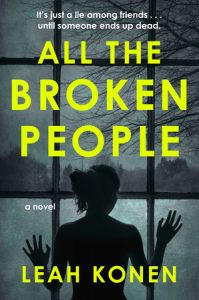 A woman in search of a fresh start is about to get more than she bargained for in this twisty and addictive domestic thriller for fans of The Couple Next Door.

Fleeing Brooklyn with little more than a suitcase and her trusty dog, Lucy King heads to rustic Woodstock, New York, eager to lose herself in a quiet life where her past can never find her. But when she meets Vera and John, the alluring couple next door, their friendship proves impossible to resist. Just as Lucy starts to think the worst is behind her, the couple delivers a staggering bombshell: they, too, need to escape their troubles–and the only way they can begin their new life is if Lucy helps them fake John’s death.

Afraid to lose her newfound support system, Lucy reluctantly conspires with them to stage an “accidental” death on a hike nearby. It’s just one little lie to the police, after all, and she knows a thing or two about the importance of fresh starts. But what begins as an elaborate ruse turns all too real when John turns up dead in the woods the morning after their hike. Now, Lucy must figure out who she can trust and who’s pulling the strings of her tenuous new life . . . before she takes the fall for murder.