Join National Book Award finalist, Pilar Quintana for a live discussion about her book, The Bitch, a searing psychological portrait of a troubled woman contending with her instinct to nurture.

Colombia’s Pacific coast, where everyday life entails warding off the brutal forces of nature. In this constant struggle, nothing is taken for granted. Damaris lives with her fisherman husband in a shack on a bluff overlooking the sea. Childless and at that age “when women dry up,” as her uncle puts it, she is eager to adopt an orphaned puppy. But this act may bring more than just affection into her home. The Bitch is written in a prose as terse as the villagers, with storms―both meteorological and emotional―lurking around each corner. Beauty and dread live side by side in this poignant exploration of the many meanings of motherhood and love.

Pilar Quintana is a Colombian author. She debuted with Cosquillas en la lengua in 2003, and published Coleccionistas de polvos raros in 2007, the same year the Hay Festival selected her as one of the most promising young authors of Latin America. Coleccionistas de polvos raros won the Premio La Mar de Letras in Spain. Her latest novel, The Bitch, won the prestigious Colombian Biblioteca de Narrativa Prize, and a PEN Translates Award, as well as being chosen as one of the most valuable objects to preserve for future generations in a marble time capsule in Bogotá. The Bitch is the first of her works to be translated into English.

Lisa Dillman lives in Decatur, Georgia, where she translates Spanish-language fiction and teaches at Emory University. Some of her translations include Signs Preceding the End of the World (winner of the 2016 Best Translated Book Award) and A Silent Fury by Yuri Herrera; Such Small Hands and A Luminous Republic by Andrés Barba, and The Bitch by Pilar Quintana. She is currently working on books by Graciela Mochkovsky and Alejandra Costamagna. 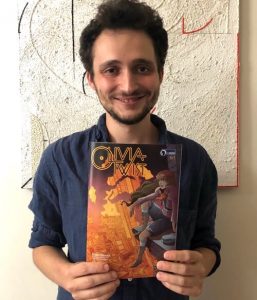 Adam Dalva’s writing has appeared in The New York Review of Books, The Paris Review, Tin House, and The Guardian. He teaches Creative Writing at Rutgers University and Marymount Manhattan College and is a book critic for Guernica Magazine. Adam has received writing fellowships from the Vermont Studio Center, Wildacres, and the Atlantic Center for the Arts. He is a graduate of NYU’s MFA Program, where he was a Veterans Writing Workshop Fellow. Adam’s graphic novel, OLIVIA TWIST, was published by Dark Horse in 2019.