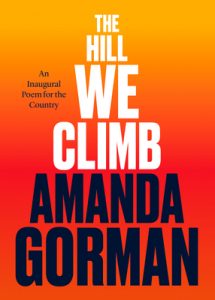 Five hours after Biden became president, Gorman’s publisher announced that demand for “The Hill We Climb” was so overwhelming that a special hardcover edition of the poem will be released on April 27. (Three months!? Why not three weeks?) With a first printing of 150,000 copies, it will almost certainly be the best-selling poetry book of the year.

The reaction to Gorman is no surprise. The youngest writer ever to recite a poem at a presidential inauguration spoke with an elegance that felt both delicate and powerful. She began, “When day comes we ask ourselves, where can we find light in this never-ending shade?’” Reflecting the spoken word tradition from which Gorman has emerged, “The Hill We Climb” is laced with clever rhymes, alluring alliteration and wry word play. “We’ve learned that quiet isn’t always peace,” she writes, “and the norms and notions of what just is isn’t always justice.” … more

In 2018, Amanda Gorman discussed being named the first First African-American Youth Poet Laureate, her inspirations, and struggles to overcome her speech impediment, with Jenna Bush on the TODAY SHOW.

Born and raised in Los Angeles, she began writing at only a few years of age. Now her words have won her invitations to the Obama White House and to perform for Lin-Manuel Miranda, Al Gore, Secretary Hillary Clinton, Malala Yousafzai, and others. Amanda has performed multiple commissioned poems for CBS This Morning and she has spoken at events and venues across the country, including the Library of Congress and Lincoln Center. She has received a Genius Grant from OZY Media, as well as recognition from Scholastic Inc., YoungArts, the Glamour magazine College Women of the Year Awards, and the Webby Awards. She has written for the New York Times newsletter The Edit and penned the manifesto for Nike’s 2020 Black History Month campaign. She is the recipient of the Poets & Writers Barnes & Noble Writers for Writers Award, and is the youngest board member of 826 National, the largest youth writing network in the United States. In 2017 UrbanWord and the Library of Congress named her the first ever National Youth Poet Laureate in the United States.